We’re still in New York (it’s been almost three weeks) and we’ve extended our trip. I still have many restaurants to try and things to do. This week we have on the itinerary: Bonobos (Raw Vegan), SproutCraft (Raw Vegan with some fermented foods), walking across the Brooklyn Bridge, tons more green juice at Liquiteria, more Pure Food & Wine (ehem… mallomars!), a possible dinner at Rockin’ Raw in Brooklyn, and more visits to my favorite restaurant in the city Blossom (upper west side location).

Speaking of Blossom… tonight we met Gena (Choosing Raw) for dinner there. My husband opted for green juice and the soy bacon cheeseburger with Cajun sweet potato fries. I had a green juice and then went for a more macrobiotic approach: organic tofu (plain), gently steamed kale, and a side of their “holy shit, this stuff is the bomb!” potato salad. (OK, that’s not really the name of it, but it’s what I call it.) For Gena’s dinner choice, she took the ultimate high road and went Raw with an enormous salad and an order of their raw sweet potato rolls appetizer.
Well, my husband and I had been kind of holed up in the hotel room for the day making calls and working, without much food other than my container of organic prunes from Whole Foods (gotta poop when you travel and prunes do the job!) and a smooshed berry flavored Vega bar. Seriously, guys, the Vega bars are just not that great. I love the ingredients and pretty much eat them just so I can have a quick snack with nutrients. But, do people seriously taste test these recipes before mass producing them? Did they try it and say to themselves, “This is actually good and people will love it.” I have my doubts. Don’t get me wrong… I love Brendan Brazier. I love Vega’s EFA oil. I love Sequel Naturals chlorella tablets. I cannot stand the vega meal shake. And, the bars? I tolerate the berry flavored bars. But the chocolate ones? Bleh… they sometimes taste like soap to me. 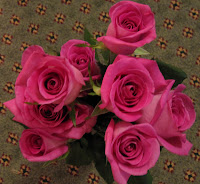 Anyway, I did not intend for the post to go on about Vega. Back to dinner. So, my husband and I basically only had prunes all day. We were famished by the time it came to dinner. I was in no mood for a salad because I didn’t think it would satisfy me. But, damn. I tell ya… when Gena’s plates came and all of the live raw food was in front of her, I was insanely envious. Her salad was huge and beautiful. The rolls, which I’ve had before, looked amazing. Yes, my food filled me up as hoped (and it was good), but I wish I would have gone Raw. Next time! Oh! And, Gena is such a sweetheart. She surprised me with roses for my birthday.

Funny story… so, it’s been raining pretty much non-stop since

we arrived. It’s the most bizarre weather for NY during this time of year. We literally have had about 2 days with some sun. And, all I brought for shoes are Crocs. You know, the shoes with holes in them that are basically made for wearing near water and are super comfy. Well, wearing shoes durable near water at the ocean or on a yacht is one thing. Wearing these through New York City with muddy puddles (while crossing Central Park) or disgusting dirty pools of water underground while walking from subway to subway is another thing. It’s really nasty. I finally couldn’t take it anymore and bought a pair of super cool rain boots. I was happy. I was proud. And, my tootsies were finally warm and toasty nestled inside my fancy new red rain boots. My attitude was GRRR! Bring On The Rain and my husband was calling me Wonder Woman (fitting now that I’m a brunette). I felt cool. It wasn’t until many hours later, after walking around in them all day, that I realized I had the enormous tag hanging out of the back of them. I am such a dork.