Austin, TX is such a cool town. We arrived Wednesday morning and I was filled with excitement because I knew I was about to embark on a delicious Raw vegan culinary adventure (I heard there are 3 Raw vegan restaurants in town, plus the Raw bar at Whole Foods). The Whole Foods Market headquarters are here with their flagship store. Whooweee!!!!! Talk about FUN! One of my MOST favorite things to do is shop for healthy foods, natural beauty products, organic clothes… all that kind of stuff. My husband and I walked in and he said, “Honey, you just take your time.” I took a deep breath and ventured up and down the aisles, looking for things that I don’t normally find in other locations. And, of course, I found some stuff. They had a nice organic baby clothes section. Here are my scores for Monkey. (Speaking of Monkey… I had another blood test today to check my hormone levels and I’m continuing to do wonderfully! My pregnancy hormone is growing perfectly and the doctor is very pleased. My next round of blood work will be October 14).

But… we didn’t eat at Whole Foods. I saw their Raw vegan bar, and although the stuff looked pretty good and I think it is very cool that they have it there… we opted to have two of our meals today at Daily Juice. For one, the food was awesome (details in a moment) and for another reason, when given the choice between a chain like Whole Foods versus an independent establishment, I like to spend my money on the latter.
Daily Juice was super awesome. I have to say that it is quite possibly my favorite spot ever for organic Raw vegan food. The food was superb. The service was impeccable. The decor and atmosphere were fresh, with an energy that was slightly seductive. I LOVED IT! 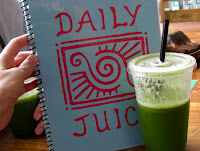 For lunch, I had a wonderful green juice made of greens and young Thai coconut water – heavenly! And, for the first time, I tried fresh durian. At that tasting, I decided I would fall into the camp of “not being partial to durian.” It tasted like onions to me, and I’m not a fan of onions. My husband thought it was cool though. I was told that it’s better in a smoothie so my husband decided to try that at dinner time, and I admit, that upon tasting it in a smoothie, I liked it (although I couldn’t really tell it was in there because it was masked by so many wonderful flavors).

We each had a Raw enchilada (the flavors were outstanding), and for dessert, I had a vanilla chocolate cookie-type thing and a cup of vanilla pudding made from young Thai coconuts. As you can probably guess, the desserts were as equally awesome as the green juice and enchiladas. 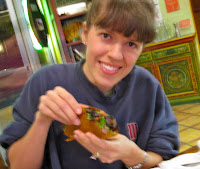 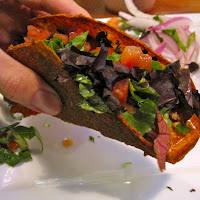 I simply had to go back there for dinner. They had an avocado sandwich which looked so intriguing, but when we arrived, sadly, it was unavailable (we’re going back there tomorrow though… I hope I can try it then). I started the meal with another large fresh organic green juice while my husband started his meal with the smoothie containing durian. For our main meal we each had two tacos. Again… nothing short of pure deliciousness and rich, fantastic flavors. My husband also had a shot of marine phytoplankton (check out this cool page of theirs detailing benefits of some super Raw foods). After having both durian and marine phytoplankton, he was feeling pretty darn good. For dessert, I polished off another one of their cookie-type things (this one had goji berries in it, too) and another pudding like I had at lunch. I was feeling super duper awesomely vibrant after such an amazing day of organic Raw vegan foods.
We leave Austin Thursday and head to Dallas, then to Oklahoma City, OK, where I think we’ll stop by 105 degrees. It’s a brand new raw vegan culinary institute by Matthew Kenney, which also has a cafe that I’m excited to try. After that, we’ll head to Santa Fe, NM (I heard there is a Raw vegan place there) and then we’ll be going home to Scottsdale, AZ.