After our trip through Fort Worth, we drove on to Oklahoma City where our goal was getting to 105 Degrees, Matthew Kenney’s new Raw restaurant and Raw academy. The weather was awful, like really awful. Pouring rain that made for a nail biting drive. But, we finally arrived. :) 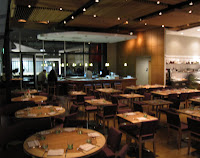 105 Degrees is gorgeous. Oklahoma City is indeed lucky to have such an awesome restaurant and academy there. (For more info on 105 Degrees, visit here.) The decor and atmosphere had a lovely cosmopolitan energy. We were there at night, so the pictures weren’t of the clearest quality, but I still wanted to share some of them. 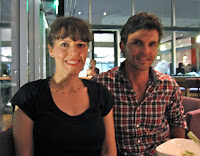 We met Matthew Kenney and had a nice chat about how he became involved in the 105 Degrees project and about some future things he’s working on, which include projects outside of the United States. I can imagine, one day, traveling the globe and blogging about my visits to various country’s and their Raw vegan restaurants. 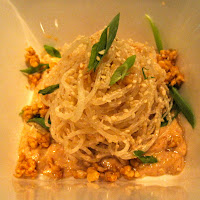 Our dinner was amazing. From the appetizers to the entrees to the desserts, our taste buds were treated to complex, sophisticated flavors. Since the restaurant wasn’t crowded (due to the bad weather), I secretly licked my bowl. I regret that I don’t have more good pictures to share of all of the Raw food we had. But, Matthew Kenney will forever have a special place in my heart, because this man officially made me a fan of kelp noodles! The sauce they were tossed in was delectable and it allowed me to get past the “crunch” of the noodles. Victory. 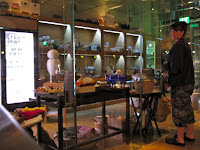 They had a cool little store that was unfortunately closed while we were there (which was probably a good thing in hindsight – LOL). Matthew Kenney’s store had 100% Pure beauty products, and, as most of you know, I love 100% Pure products (check out their website here). 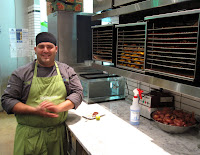 We met the sous chef, Don, and he gave us a tour of the place. This guy has an impressive culinary resume (studied in Paris), and although he’s new to Raw, his talent and passion for food really comes through. He even demonstrated their PacoJet! I’ve always wanted to see one of those things in action. They make the creamiest, dreamiest ice cream. We shot some video of it.