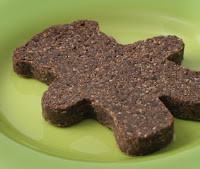 Aahhh! Here it is. I found the recipe – thank goodness. I was so elated that I found it that I had to make another batch on Saturday afternoon. Yum!!!

We went to a birthday party that night and I used a little round cookie cutter to cut mini Cherry Chocolate Brownie Bites. Then, I put them in a little plastic bag from a craft store (I use bags like that for Raw goodie-gift-giving), tied a little ribbon around the top and gave them to the birthday guy. He was so excited that he immediately started sharing them around the table.

Confession: Later that night after we arrived home, I ate half of the 8X8 glass-baking dish worth of them. Goodness, they’re so freakin’ good.

Using your food processor, fitted with the “S” blade, pulse to briefly mix the ground almond pulp with the lucuma, chocolate, salt, and hemp seeds. Add the remaining ingredients and process until the mixture sticks together when gently pressed between two of your fingers. Press the delicious mixture firmly into a glass 8X8 dish. Cut into squares (or whatever shapes you’d like) and serve plain or topped with Raw vegan ice cream for extra indulgence.

Vitamineral Green Loading Update
All is well with my experimental loading of Vitamineral Green. I’ll admit… it’s pretty icky the way I take it, but when you’re loading it like I am, I just want to plug-n-chug it, get it over with, basically don’t breathe while drinking it (you get the point) haha. I take a glass mason jar, add a couple heaping tablespoons of Vitamineral Green Powder, add 1 cup of water, and often times I add a tablespoon of Fruits of the Earth Powder, too. Shake it up and drink it down. (Ick!) Then, I chase it with a cup of plain water. On some days, I toss down another heaping tablespoon later in the afternoon.