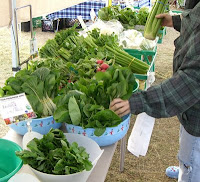 Eating organic food is important – we all know that. Eating locally grown organic food is even WAY BETTER! For years, I’ve longed to taste fresh, organic produce grown on land local to me in Arizona. Unfortunately, every time I went to a farmer’s market, there wasn’t anything that was both local and organic. So, I ended up opting for Whole Foods (I’m a real stickler for organic). Even though I shopped at Whole Foods, I made it a point to choose foods that traveled the shortest distance, for both environmental and nutritional benefits. 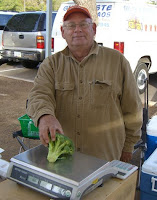 Well, all that has changed for me now. YIPPEE! A short while back, a friend of mine turned me on to a local farmer, Doug (of Lewis’ Hen House & Veggie Farm), who sells his locally grown organic produce at a nearby farmer’s market. Doug’s farm just became certified organic this past February of 2008. Congratulations to you, Doug, and THANK YOU!!! (That’s Doug weighing my broccoli in the picture.) 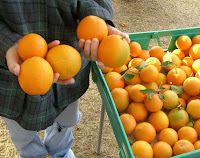 So, off I went to the farmer’s market to meet Doug and try out his fresh organic goodies. I purchased all kinds of produce: oranges, cauliflower, broccoli, celery, baby bok choy, carrots, cabbage, yams, romaine lettuce (the biggest and most gorgeous ever!), and more. I was like a kid in a candy store… smiling from ear to ear. I couldn’t get home fast enough to make some delicious Raw vegan dishes with my treasures. 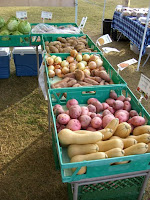 What happened was a little unexpected. With my first bite, I was quite moved in an emotional way. I was so proud and excited to be participating in something that is so important – supporting a local farmer, tasting food grown by his very hands, minimizing my carbon footprint, and experiencing nutrition at its very best. I swear it tastes so much better than what is bought at the store, and why wouldn’t it? It’s local and organic! There is more nutrition in it because it’s picked fresh, maybe a day or two before being brought to the market to sell. There is a saying in Traditional Chinese Medicine that a food’s Qi (pronounced “chi”) decreases the farther it gets from its source or origin. Qi is known as life energy, which is thought to be intrinsic in all things. Pretty important stuff. So, I lovingly refer to my locally grown organic fruits and vegetables as Super Qi Food!

When you buy food from the grocery store, it’s usually been packed and waiting in the refrigerated area for many days, even weeks, plus the travel time and distance (Qi-loss). That’s not the case for me anymore though. Now that I’ve found Lewis’ Hen House & Veggie Farm, I’m blessed to have Super Qi fruits and vegetables year round – local, organic, and awesome. I can’t wait to go back this Saturday.