Today, we headed south along the coast until we reached South Carolina, where we spent most of our day. During the morning ride, we each had one of those protein shakes I mentioned yesterday. I also munched on an organic cucumber. Refreshing, simple, low calorie, and hydrating. Great travel snack. 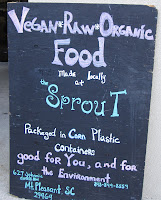 We changed our plan, of trying to land at Whole Foods for the main
destination, to a place called The Sprout (they serve delicious, organic raw vegan food). What a little gem of a place. Firstly, they place a huge emphasis on organic food which I loved. They had a few places where it was written “everything is organic.” That’s my kind of place… not compromising. Secondly, they mostly served raw vegan options, while still offering a couple of cooked vegan foods.

We started the lunch with fresh wheatgrass juice (nasty as heck, as usual, but good for us so we did it). They served it on a small slab of “marble.” I love that extra little touch. Then, I had the largest size they offered of fresh green juice (I think the name was Alkaline Battery – or something like that). It was simply cucumber, kale, celery. Another little lovely touch was that they served it in a wine glass. Awesome.

Next up, we both opted for a large salad which had a raw veggie / nut pattie on the side of it. We devoured these, they were so good. I kept moaning with every bite. Major yum!
The little cafe was right next to a fitness center, which excited my husband because (for $10) he was able to work out after lunch. While he did that, I hunkered down inside The Sprout with my Kindle 2 (blog details on the Kindle 2 here).

Before getting back on the road, we ordered two more large salads to go, and bought some raw cookie balls which were quite good. This is picture of my salad with some fermented okra. Interesting, slimy, and pretty tasty. Oh! And, they had some adorable organic onesies! I bought one for our little monkey that said on the front “Save The Planet, We Deserve It.”