I like eating pumpkin and sunflower seeds because the pumpkin seeds give my body zinc, vitamin K, iron, magnesium and more.  The sunflower seeds are a great source of vitamin E as well as vitamin B1, selenium, folate, copper, and more. Yum!

So, I sent Greg to Whole Foods the other day with the intention of having him buy a bag of GoRaw’s seeds (about 10 bucks) because I figured I didn’t want to make them myself… and then I thought better of it. I can make those in no time… even with an infant (and it’ll save us money)! So, instead I had him buy a pound each of raw organic sunflower seeds and pumpkin seeds. Here is what I did with some of them. Take these to the next movie you go to and you will not miss the popcorn! 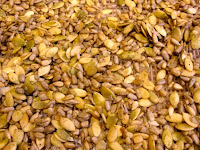 Place the seeds in a bowl with enough filtered water to cover by about an inch. Let them soak like this for 6-8 hours. Drain off the water and give them a quick rinse. Put them back in the bowl and stir in the salt and pepper. Place them on a dehydrator tray and spread them out until the tray is covered (I use an Excalibur dehydrator and I used only one tray). Dehydrate them for one hour at 130-140 degrees F. Reduce the heat to 105-115 degrees F and dehydrate until thoroughly dried (approximately 14-20 hours).

When using an Excalibur dehydrator, it’s recommended that you begin the dehydrating process at a temperature of about 130-140 degrees F for 1 – 2 hours. Then, lower the temperature to 105 – 115 degrees F for the remaining time of dehydration. Using a high temperature such as 140 degrees F, in the initial stages of dehydration, does not destroy the nutritional value of the food because it’s during this initial phase that the food does the most “sweating” (releasing moisture). When this occurs, it is cooling the food. Therefore, while the temperature of the air circulating around the food is about 130-140 degrees F, the food itself is actually cooler. These directions apply only when using an Excalibur Dehydrator, because of the Horizontal-Airflow Drying System. 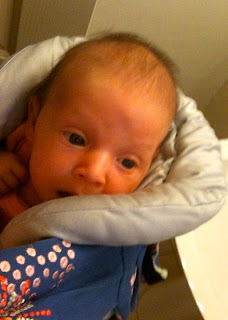 I’m practicing babywearing with Kamea a little every few days. I’m not crazy about doing it too much right now because her head control is not stable and I freak out when her head almost bobbles. I’m always trying to position my body so she has support (like she’s leaning back in it), and that just doesn’t feel too good on my back. Still, I’m comfortable sometimes using the ERGO babywearing system with the infant insert (organic). I was sent one by the company to try out. In the few times I’ve attempted babywearing, I’ve tried the Moby, the Gypsy Mama, and the ERGO with infant insert. The ONLY one I’m comfortable using is the ERGO right now because it’s so easy to put on and Kamea seems most comfortable and safe in it (keeping in mind the aforementioned head control issue I’m still working through). I can’t wait until her head control gets better. By then, I’ll be better at the wraps, too, I suspect, but with how easy the ERGO is to put on AND take off I can see myself using this a lot (the Moby/Gypsy Mama are hard to get her out of and that scares me… I bend over and basically feel like I’m twisting into a pretzel to get her out and get it off – I know though, I’m just not good at it yet).