I first heard Andrew Saul in the Food Matters documentary (a must see doc if you haven’t already – read my review of it here).

No Deaths from Vitamins – None at All in 27 Years

(OMNS, June 14, 2011) Over a twenty-seven year period, vitamin supplements have been alleged to have caused the deaths of a total of eleven people in the United States. A new analysis of US poison control center annual report data indicates that there have, in fact, been no deaths whatsoever from vitamins . . . none at all, in the 27 years that such reports have been available.

Even if these figures are taken as correct, and even if they include intentional and accidental misuse, the number of alleged vitamin fatalities is strikingly low, averaging less than one death per year for over two and a half decades. In 19 of those 27 years, AAPCC reports that there was not one single death due to vitamins. [1]

Still, the Orthomolecular Medicine News Service Editorial Board was curious: Did eleven people really die from vitamins? And if so, how?

Vitamins Not THE Cause of Death

Vitamins Not A Cause of Death

In the other seven years reporting one or more of the remaining ten alleged vitamin fatalities, studying the AAPCC reports reveals an absence of any RCF rating for vitamins in any of those years. If there is no Relative Contribution to Fatality at all, then the substance did not contribute to death at all.

Furthermore, in each of those remaining seven years, there is no substantiation provided to demonstrate that any vitamin was a cause of death.

If there is insufficient information about the cause of death to make a clear-cut declaration of cause, then subsequent assertions that vitamins cause deaths are not evidence-based. Although vitamin supplements have often been blamed for causing fatalities, there is no evidence to back up this allegation.

1. Download any Annual Report of the American Association of Poison Control Centers from 1983-2009 free of charge at http://www.aapcc.org/dnn/NPDSPoisonData/NPDSAnnualReports.aspxThe “Vitamin” category is usually near the very end of the report.

The vitamin data mentioned above will be found in Table 22B.

I am excited to announce that I’m an ongoing contributor at the swanky new eco-fabulous website, One Green Planet. Have you been there yet? Wait! Before you do, you better go grab a green smoothie or a tall glass of cold raw almond milk, because there is so much good info you might be there a while.

In my first post for them, I wrote about 3 great ways that busy people can incorporate raw food into their lives without having to think twice about it. Check it out here…

I have a real love for cucumbers… They’re such a great summer time snack. I put them in salads, smoothies, juices, and they’re especially fun as boats for carrying yummy fixin’s like mashed up avocado. Previously, I shared my Avocado Cucumber Smish Smash recipe here… still one of my favorites. Here’s another great one I’ve been making the past couple of weeks. It’s simple, takes about 5 minutes, and uses minimal ingredients. After you have your cucumber in quarters, like boats, scrape the seeds into a medium size bowl. Add the avocado, lime, salt, and onion powder. Mash up the contents. Fill the boats with the avocado mixture. Top with fresh basil, if desired. That’s it! Enjoy!

Want your kids to eat more veggies? Use a spiralizer to prep them and watch your kiddos gobble them up! Here is a cute video of my friend’s daughter, Ava, doing just that!

There are three kitchen utensils that I absolutely love using. Each time I use one of them, it’s like, “oh yeah, so glad I have you.”

Please allow me to introduce to you, three of my best friends in the kitchen…

1) Long, narrow spatula
This is a beauty when it comes to cleaning out my high speed blender. It makes scraping out the blender that much easier and faster. I know, it seems like it wouldn’t make that much of a difference, but it does! Now, if I go to use it and it’s not there (it’s dirty) and I have to use an ordinary spatula, I make a sour puss face. A former student of mine bought this for me a few years ago. I can’t find one on Amazon. It looks like it is from Crate & Barrel. 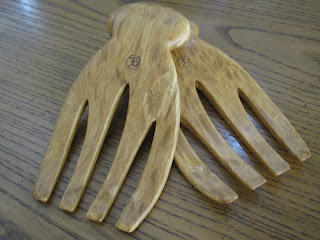 2) Bamboo hands
If you truly want an amazing tossed salad, you’ll actually make a tossed salad… by tossing it! For that, I love my second hands. The best salads are truly tossed and as a result, your yummy dressing (ehem… 4-Ingredient Magic Dressing anyone?!) gets over every thing. And, in my opinion, you end up using less dressing this way, because you’ve helped the dressing go a long way by tossing it. I bought my awesome bamboo hands in California, but they are available on Amazon.

3) Offset Spatulas
When you want to smooth the top of your raw cheesecake perfectly or you want gorgeous flax crackers that look like a professional made them or you want to easily spread your almond pulp biscuits… Then you want to use an offset spatula. They’re awesome! I have many different sizes and highly recommend getting a few. On Amazon you can get various sizes here. 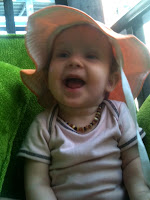 And… of course, my REAL best buddy in the kitchen is baby girl, Kamea. :) I can’t wait until she’s helping me wash dishes make smoothies.

What are your best friends in the kitchen?

I was using my VegOut app a few weeks ago (that’s how I found out about the vegan french toast I posted about here from Scramble), and I also saw there was a restaurant (and academy) serving (mostly) locally sourced, all raw, vegan, and organic food not far from where I live. WTF?! Seriously? And, I didn’t know? Well, turns out, it had just opened up (the cafe) and I believe the academy is opening soon.

It’s by Chef Sara and it’s called Chef Sara’s Raw Vegan Academy & Cafe. Location: Cave Creek, AZ. Today, we decided to pack Kamea (and the car full of any potential “we’re-out-and-about-with-a-baby” must haves) and take a little drive up to Care Free / Cave Creek areas, where we met my mom and her friends for lunch. Cave Creek is a darling little town packed with all kinds of fun treasures. Including… The Town Dump. 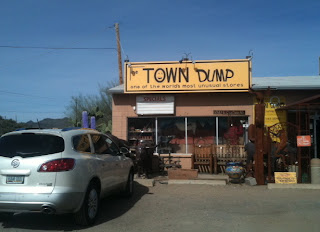