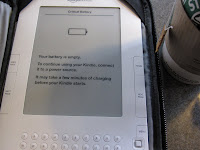 Today was a cloudy day in NY (many of them have been) so it felt like a good day to take the Kindle2 to Starbucks and enjoy some warm tea. I haven’t used my Kindle2 since I arrived so I was excited about checking out the new books I recently added to it. However, once we arrived at Starbucks and I was all nestled in my chair, warm tea in hand, I opened my Kindle cover and was met with: “Your battery is empty.” See in the photo to the right… the picture of the batter is EMPTY! Bummer. And, I hadn’t even been using it, so I’m not sure how this happened. Oh well. I just drank my tea and we “people watched” through the window. Good times.

Later in the day we ate a late lunch at Cafe Blossom – I am LOVING that place. I enjoy the Raw items, the cooked vegan foods, and the fresh organic juices they have. YUM! As I sit in the hotel writing this past 10pm, I’m wishing very badly that it was early enough to go grab some of their green juice and an order of their (Raw) Autumn Sweet Potato Rolls. All I have in the room is water and a Vega bar (chocolate) and if you followed my Twitter and FB update earlier today, you know that sometimes I don’t like those bars because they taste like soap?!? Hence, my apprehension to tear into the lone bar sitting by the TV across the room.
Here are some neat tidbits I grabbed from the Organic Consumers Association’s email newsletter about organics:

-In a conventional diet, we are exposed to over 70 pesticide-related pollutants on a daily basis. A recent 2009 report found that switching to an organic diet reduces pesticide exposure by over 95%.

-The Environmental Working Group published a list of the 12 most pesticide ridden foods based on 87,000 tests. Nectarines, peaches, apples, strawberries and imported grapes topped the list. The most pesticide-free non-organic produce includes onions, avocados, and sweet corn.

And… last but not least… a recipe of mine was featured in VegNews Recipe Club email newsletter today (my recipe for Teriyaki Noodles). Go to VegNews.com to subscribe.