We are heading out to see Avatar for the 7th (and final) time. We really love this movie… the beauty, the story, and how it takes us to fun-land every time we see it. As you can probably guess, we don’t go near the concession stand with a 10-foot pole. Gross! And, sorry, I’m not paying $4 for a bottle of water that is contained in icky plastic. So, because I’m on a “special diet” *wink wink* I bring my own snacks and filtered water in a glass bottle. Past snacks have included: protein bar, green smoothie, fruit, kale salad (yes, I brought it in my tiffin with a travel size bamboo fork), chocolate, raw cookies… the list goes on. 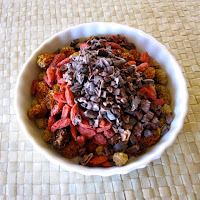 But, I’ve created a special snack for this movie trip and I’m calling it Pandora Superfood. It’s made of unique and delicious treats by Navitas Naturals. Hmmm… Na’vi? Navitas? Coincidence?


It’s the perfect snack for this movie because the ingredients actually look and taste like something I’d imagine you’d find on Pandora! When I eat this I feel like I am flying on a dragon or swimming in pools of bioluminescent life force. :)


Here is what is in each portion for the movies:
2 Tablespoons Cacao Nibs

I love raw chocolate and I’m no stranger to it. According to Navitas Naturals’ website, Cacao has long been enjoyed for its healthful and invigorating properties in Mexican, Central, and South American cultures. In fact, Mayan civilizations associated cacao with the food that their gods chose to consume and thrive upon. So impressed were the Mayans with cacao’s taste (and its ability to promote energy), that cacao paste was frequently used in sacred rituals, with an annual festival held devoted entirely to honoring the “cacao god.”

Cacao contains a naturally rich supply of antioxidants, and is also an excellent source of dietary fiber. In addition, cacao is known to be one of the highest dietary sources of magnesium, contains an impressively high iron content, and also possesses many other essential minerals in significant quantities.

These pretty little gems are powerhouses of nutrition. I keep plenty of these stocked at my house.  According to Navitas Naturals’ website, Goji berries have been appreciated in Asian herbal medicine for several millenniums, but only recently have western cultures “discovered” the power of this remarkable food. A small and red berry, goji’s grow on a thorny perennial bush, and are indigenous to the difficult terrains of the Himalayan mountain range. Often coined as “red diamonds” on the Asian market, the goji berry has long been regarded as one of the most nutrient-rich superfoods on the planet, with ancient Chinese monks crediting this berry to greater health, vitality, longevity, energy, and stamina. Western science agrees that indeed this special berry has a remarkable nutritional profile, and it is now among the most highly sought-after superfoods around.

Arguably among the most potent superfoods known, the goji berry offers an exceptional balance of daily macronutrients: containing carbohydrates, high-quality protein, healthy fat, and soluble fiber. The goji’s solid plant-based protein is packed with 18 amino acids — including all 8 essential amino acids – which is 10% of the fruits composition. Also full of free-radical-devouring antioxidants, goji berries have been historically used to support the immune system and longevity. Rich in vitamin A and a good source of vitamin C, these berries additionally possess over 20 trace minerals and vitamins including zinc, iron, phosphorus, riboflavin (B2), vitamin E, and carotenoids which include beta-carotene. And to put things in perspective on just how powerful the little goji berry is, ounce per ounce it contains more vitamin C than oranges, more beta carotene than carrots, and more iron than soybeans or spinach.

Lightly sweet with a wonderful texture. I want to eat these by the handful. And, heck, why not? These are amazing! According to Navitas Naturals’ website, Mulberry trees originally came over on the Silk Road from China to Turkey thousands of years ago. As one of the precious goods for trade, their leaves served as food for silk worms, and their delicious berries enjoyed as an exotic and divine treat. Today, the fruit is still an important part of the Turkish cultural tapestry, and the berry’s unique flavor is enjoyed by people around the world.

More than just a sweet treat, Navitas Naturals Mulberries are a true superfood. They are one of the few fruits to be considered a protein source — boasting a respectable 3 grams of protein per ounce – and are an excellent source of iron, calcium, vitamin C, and fiber. Mulberries also contain a high concentration of Resveratrol, an antioxidant compound that combats free-radical damage. Recent studies have shown that regular consumption of this special antioxidant helps promote a healthy heart and longevity.

The first time I tried these, I immediately thought, “Move over crappy sour patch kids, it’s time for something way more delish and oh-so-healthy at the same time!” These will throw a party in your mouth. According to Navitas Naturals’ website, Originally cultivated thousands of years ago in the Incan Empire, these dried berries have enjoyed a huge resurgence of popularity in markets around the world, due to their unique taste and remarkable health benefits. Also known as “Incan Berries” or “Cape Gooseberries,” Goldenberries grow in warm climates on a type of small but resilient bush, where natural paper hulks resembling Chinese lanterns delicately cradle the small golden fruit on the inside. Once harvested, the berries are sun-dried, developing a robust and complex citrus-like flavor that is appreciated by everyone from gourmet chefs to children.

Not your average dried fruit, flavor-packed Goldenberries also boast an excellent nutritional profile. The fruit is best noted for its high amounts of carotene and bioflavonoids (vitamin P) — nutrients which studies have shown to produce anti-inflammatory and antioxidant activity (among many other benefits). Goldenberries are also an excellent source of vitamin A, vitamin C, and contain a good amount of dietary fiber and pectin. Unlike most fruits, Goldenberries also contain protein and phosphorous.