Thursday – All Raw
Protein shake (2 scoops Sun Warrior chocolate protein powder, 1/2 t cinnamon, pinch nutmeg, 2 cups filtered water)
2 small locally grown apples
1 grapefruit (from my mom-in-law’s yard)
Kale chips while breastfeeding. This was not an easy task. In bed nursing Kamea and trying to quietly eat crunchy kale chips. It worked though. She didn’t wake up, although I did get kale chip crumbs on her head.
Granola, raw almond milk, and brownie – So, I was really hungry and went for a bowl of GoRaw’s granola and my homemade raw almond milk. As I was leaving the kitchen, I decided I wanted something else in it. So, I grabbed one of Blue Mountain Organic’s chocolate brownies and added it to the bowl. Yum! Their brownies are very dense and rich, and a little dry sometimes, so by adding it to the bowl with the milk. Yum! Perfecto!
Salad – romaine, red bell pepper, blueberries and avocado dressing
Kelp noodles with veggies and cream sauce (new recipe I’m working on for my next book)
2 cups Vanilla Blackberry Frosty
Small bowl granola with almond milk

Friday – All Raw
Organic Coconut water (available in the bottle, raw and organic, in freezer section of Whole Foods)
Blueberries
Pure bar
Salad with carrot avocado lemon salt and pepper
Brownie with almond milk (I used my idea from yesterday, only this time I left the granola out. Instead I just crumbled up the Blue Mountain Organic brownie in a bowl and drenched it with raw almond milk – good!) 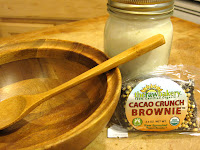 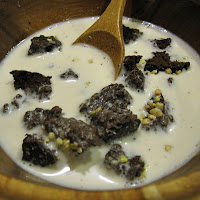 Vegan French Toast and Sweet Potato Hash and decaf coffee – I was stoked to find a restaurant, Scramble, serving some vegan options including vegan french toast and vegan scrambles (organic tofu) using mostly locally sourced fresh ingredients. (I found it using my iPhone app VegOut, powered by Happy Cow.) I had to try! It’s been YEARS since I had french toast. It did not disappoint. It was delicious – everything. But, I admit, on the drive home I lapsed into a food hangover – lol. Whew! Cooked food like that can take its toll on me. Next time I’ll get a healthier option, like a tofu and veggie scramble. But, this time, I had to have the french toast. At least once, right?! Drenched in maple syrup! Om nom nom.
The rest of the day I’m EAGER to run back to raw though. That’s how it happens for me. I indulge a little, have a treat, and my body says, “OK, get back to raw girl!”
So, the plan for the rest of Saturday is: 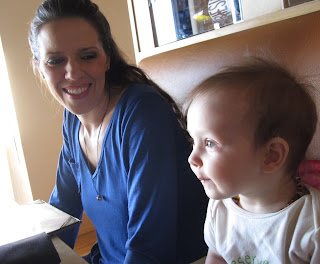