I was watching Oprah’s show yesterday about diabetes. Man, that is scary stuff! I mean, I know it’s awful to have diabetes, but the statistics are a friggin’ growing nightmare! When are people going to wake up and realize that soda, donuts, and fried chicken are crap?! I’m grateful that I’m on a plan for life where the odds are that I’ll never even come close to getting that terrible disease… meanwhile, the cost of it is going to take our nation down if something doesn’t change, and for that, I’m miffed. Come on people! Let’s get this under control! It’s not rocket science… it’s simply eating delicious healthy food and moving our tooshies! Can you tell I’m a little fired up about this?


One of the things I took away from Oprah’s show was the importance of exercise. True, I always knew this information, but I love watching things, reading information, and hearing aspects that continue to motivate and inspire me. When Bob Greene came on the scene he said two things that I loved: 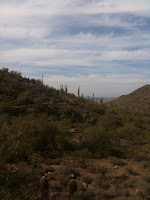 Today’s exercise was fun! My normal 2-mile walk takes me 40-45 minutes. But today, I made it even better. I went on a hike that was easy in some parts and moderate in other parts. The time it took to complete was 65 minutes! Whoo hoo! That’s some awesome exercise. I felt (and still feel) fantastically full of life!