If you look through all of the recipes in all of my books, you’ll notice that not one is for kale chips. Honestly, I have no excuse other than… well… no, I have no excuse. I guess I just didn’t jump on the kale chip bandwagon. I’ve bought some over the years online and at Whole Foods Market, but none of them excited me. They were either too chewy/sweet or crumbled up so much I had to eat them with a spoon or – eeewww! – there was a dehydrated bug in one bag. Eeek! 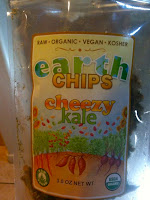 But. I recently tried some kale chips from another company (blogged about it here), and I fell in love. Blue Mountain Organics, you have forever converted me to a kale-chip-lovin’-chick! Even though I directed you to the other blog post of mine where I’m just short of doing cartwheels because I loved them so much, I’ll say a few words here. THEY ARE AWESOME! Specifically, I’m referring to the Cheezy-flavored kale chips they sell. However, I decided to try their Chocolate Kale Chips the other day, and I’ll be honest, I did not have high expectations – only because I wondered how kale and chocolate would be super good – they’re probably decent, I thought, but I didn’t expect much more. Wrong. They rocked. It was love at first bite.

All of this excitement made me take a stab at making my own organic raw vegan kale chips and save a little money. After all, I have a super awesome cheese sauce (you all know the one I’m talking about right?). Well, if you’re new to my blog, it’s my Cheezy Hemp Nacho Sauce (recipe and video demo for the sauce here). It kicks ass! I figured it would be the perfect sauce for kale chips. I sent Greg to Whole Foods to buy some kale while I stayed home and made the sauce. 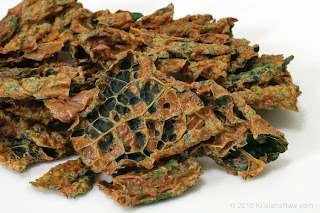 They are awesome. Seriously – you’ve gotta make these. We all went nutso for them!

Basically, you make the Cheezy Hemp Nacho Sauce I linked to above. Then, take one bunch of kale and wash it. Tear it into pieces (you can use curly kale or dinosaur kale – they both work great – and I usually leave the stem in but you can take it out). Put the torn kale in a large bowl and pour the Cheezy Hemp Nacho Sauce on top. Stir it all up with a big spoon, or your hands, until the kale is as covered with sauce as you can get it. Place the saucy kale on a dehydrator tray lined with a Paraflexx sheet (or parchment paper if you’re not using an Excalibur dehydrator). Dehydrate for an hour at 130-140 degrees F. Reduce the temperature to 105-110 degrees F and dehydrate another 7-9 hours. Transfer the kale chips to a new dehydrator tray without a Paraflexx sheet and finish dehydrating until you reach your desired texture of kale chips (maybe another 7-10 hours).

They’re so delicious! I couldn’t stop there though. I started thinking about all the different cool sauces I could use to make kale chips, and the next one I tried was my Velvet Wine Sauce (see picture below; the recipe for the sauce is from my newest book Kristen Suzanne’s EASY Raw Vegan Transition Recipes – I also shared this recipe in a recent limited edition email newsletter). Basically, follow the same directions as you do with the Cheezy Hemp Nacho Kale Chips, but use the Velvet Wine Sauce instead. These were so friggin’ delicious that I sent Greg to Whole Foods for more kale. I had to make another batch.

As you can see, we’ve been enjoying a lot of kale chips in this house the past few weeks. They’re so satisfying, flavorful, and nutritious.

If you don’t have a dehydrator, or you simply don’t like making your own stuff, then I highly recommend heading over to Blue Mountain Organics and loading up on their Cheezy Kale Chips and Chocolate Kale Chips.