Geesh, where does the time go? Sorry for the lack of blogging, but we’ve been busy. Lots of Kristen’s Raw projects under way, among other things… being a mommy…. taxes (ugh!)… and fun news… we bought a mini van! I’m officially a mom now. ;) I promised my husband that it doesn’t mean I’ll start wearing sweat pants with elastic waist bands all the time. And, my friend said that so long as I didn’t start referring to dinner as “supper” then it’s all cool. I have to say though… I love it! It’s soooo roomy, even with a car seat and a big dog. When we go for outings, which I want to take Kamea everywhere now so she can experience all kinds of sights and sounds, we pack a crap load of stuff. Plus, our Orbit car seat seems to take up a lot of space due to its 360 degree rotation nature. We got a white Toyota Sienna and I’m in love. I feel like I’m driving around my living room it’s so comfy.

Anyway… those things kept me super busy this week so I’m going to quickly post my food for today and get back to work on other stuff. 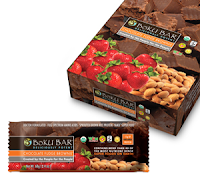 Boku bar – I’ve been wanting to try these for a very long time, but I’m not crazy about buying a box of something that is pricey when I haven’t tried one. So, I put it off and put it off. Finally, I decided to just do it and force myself to eat them even if I didn’t like them. Greg is really good at that anyway. I tried my first one after dinner the other day, and it was not love at first bite. I think part of the problem was having it after dinner which kind of put me in the mood for dessert without realizing it. I ate half and gave the other half to Greg. Today, I decided to try again. The ingredients are impressive and I was eager to like them at least a little. I had it for breakfast and I liked it better this time around. There is a good chance I’ll buy them again. The taste, for me, isn’t good enough that I’m buying them for that. Rather, I would possibly buy them again to have a nutrient dense snack with a good amount of protein that goes down pretty well with a cup of tea or a glass of homemade raw almond milk.

Decaf with rice milk – Sometimes I just want a cup of fresh brewed, organic decaf coffee, ya know? I was out of almond milk, so I used some rice milk we had on hand. Now that I regularly make raw almond milk (I made it later in the day for the raw soup I had below), I won’t buy rice milk. But, I had this on hand in the cupboard (a couple of them actually, because we bought a box at Costco last year). 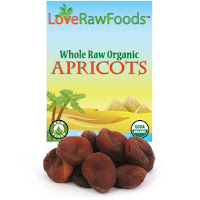 2 brazil nuts – I like to have these every few days to make sure I’m getting enough whole food based selenium in my diet. You’ll see these more often in my food journals as a result.
2 dried apricots – Blue Mountain Organic are my favorite. They’re dark and so densely sweet that I can only eat 1-2 at most. What a difference between these jems vs what you traditionally find in the store. (I bought my brazil nuts from them, too. They’re one of my favorite sources for nuts, raw snacks, and dried fruit.)

Raw soup – I’m experimenting with recipes for my next book and this one will definitely be in there! It was a hit.

Chocolate Mint Icee – Same as the soup… a big hit with the family and this is going in my next book (due out in Spring 2012).