Some of you don’t know there was a time when I was writing two blogs. There was (and is) my blog you’re reading now, Kristen’s Raw.

I was also writing a Green Mommy Blog where I shared my “green mommy” ways.

Shortly after I entered motherhood, I realized that it was a wee bit nutz to maintain two blogs so I stopped writing the Green Mommy Blog.

Fast forward to today and I decided to (soon) close that blog, but not without sharing some of the gems of posts. I’ll be updating the information, as well as including some of the helpful comments people wrote. Here’s the first article.

END_OF_DOCUMENT_TOKEN_TO_BE_REPLACED

Now that I’m breastfeeding, I check all the ingredients of a product to make sure it’s safe, gentle enough for Kamea, and won’t mess with my milk supply. As a result, I’ve taken a close look at a few different green powders. Because my diet is on the bland side to prevent digestive upset for Kamea (I’m not even sure this is entirely necessary, but I’m playing it safe just in case), I’m not getting as many greens as I’d like, so I wanted to add a green powder to my life. However, the two former favorites of mine, Vitamineral Green and Ormus SuperGreens, might not be good choices. These are great products (my husband still uses both!), but I’ve decided not to use them while breastfeeding. They both contain parsley which can reduce milk supply. 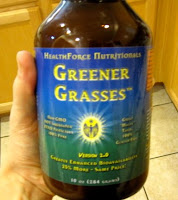 But! I “think” found one that fits the breastfeeding bill:
HealthForce Nutritionals Greener Grasses™ For the most part*, it seems that the handful of ingredients Greener Grasses contains are fine to consume while breastfeeding, and, in fact, some are even considered galactagogues (promotes lactation)! After I researched the ingredients online, I checked with both my (and Kamea’s) naturopath, and then I checked with my midwife. They both agreed that it was fine to take while breastfeeding.

How does it taste? It tastes like most green powders… it’s not something that I want for dessert – haha – but it’s nice and mild in flavor. I usually just drink it down with a 1/2 cup of water.


*As with many things… you find some info supporting and some info not supporting a couple of these ingredients as safe for breastfeeding, barley grass and wheat grass specifically. While many websites said barley grass was good while breastfeeding, this site claimed otherwise. A similar situation occurred for wheat grass. Perhaps the milk-supply-increasing ingredients balance out the ones that might reduce it? I’m not sure. I decided to go along with my naturopath and midwife and give it a try for a few days. My results since taking it? My milk supply seems to have increased – I didn’t actually need that – but Kamea isn’t complaining – lol. Still… I wonder. Since it doesn’t seem to be reducing my milk supply, I’ll keep taking it but not every day. I’ll keep a watch on things and go from there. Meanwhile, I will keep researching, too. I wish I could find a definitive answer… any lactation specialists out there know?

UPDATE: According to the book, The Nursing Mother’s Herbal, green drinks and super green foods that include barley and alfalfa greens have traditionally been used to increase milk. I just bought the book for my Kindle last night and I like it a lot! Very informative so far.

To keep my nutrition up for both Kamea and myself while breastfeeding, I’m working on a number of things.

1) Taking my prenatal vitamin daily (I’m switching between New Chapter and Vitamin Code that I have on hand) along with other supplements such as wheat grass tablets, vegan DHA, B12, (and iron on occasion right now because my numbers after birth showed they were on the low side). There are some other things, but I take them maybe 1-2 times a week (K2, spirulina, chlorella, etc). I’m also making sure I get vitamin D (I just had my blood levels tested and I’m waiting for the results).

2) Trying to get in enough calories. A breastfeeding mom needs about 500 more calories than pre-pregnancy is my understanding. I haven’t had the biggest appetite, so I’m trying to get extra calories down through heavy shakes and smoothies that I load up with things like: hemp seeds, protein powder, flax or chia meal, fruit, greens, sunflower lecithin, and sometimes things like avocado, prunes, goji berries, raw carob, etc.

3) Staying hydrated!!! I’m drinking lots of water, eating water rich foods like watermelon, and plenty of Raw organic young Thai coconut water is being enjoyed. I haven’t had any green juices yet, but I need to get going with that! I’ve been so busy working on breastfeeding and getting enough rest. I’ll get green juices back into my diet soon though.

4) I want to make sure I’m getting enough calcium in my diet so I’m adding more foods that are rich in calcium such as dark leafy greens, almonds, wakame, tempeh, etc.

I might be missing some things, but that’s off the top of this mommy’s loopy brain right now. :)

Do you have any other suggestions for great breastfeeding nutrition? 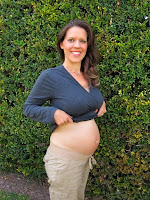 (Happy mama at almost 6 months) This week we had our monthly visit with our amazing midwife, Shell (see why we are choosing a midwife / homebirth here). Everything is going wonderfully. My weight gain is healthy (weighed in around 145 today), my urine analysis is pristine, my blood pressure is low and healthy, and overall, I feel great. Shell mentioned that I don’t seem to have some of the issues many pregnant women seem to experience (swollen extremities for example). I attribute it to my healthy lifestyle. 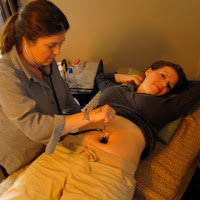 We’ve declined the use of any more ultrasounds since the last one we had around 13.5 weeks, and we’re not going to use doppler either (I just don’t completely trust either of those, and unless it’s warranted for something that could be actionable, then I see no reason to use them). We’re going old school and using a fetascope which can be tricky to use in hearing the heartbeat unless you have a practiced person doing it. I bought one on Amazon to use myself, but I’ve yet to find the heartbeat in my attempts. Shell heard our baby’s heartbeat today and it is normal. :) 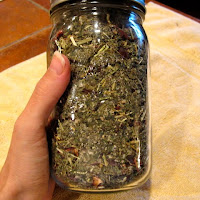 She also gave me some magic pregnancy tea. I call it magic because anything this woman makes or does is magical for my baby. She’s just so awesome. My instructions are to drink a quart a day. Yum! I can’t wait! 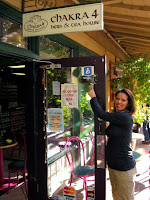 After our appointment, we went to one of my favorite places for lunch, Chakra 4 Herbs. They are organic and have many raw and vegan dishes. I always get a bowl of their (cooked) soup because it’s the best soup in the whole world. Truly. And, then I usually get one of their giant organic wraps that is stuffed with greens, veggies, olives, and raw vegan cheese. On our way out I noticed they had a “breastfeeding friendly” sticker on the door so I had to take a picture of it. They rock!

No, it’s not anytime real soon – so don’t get too excited (although I must admit I’m very excited at the idea of it in the future!). However, here are some things I’m researching to get prepared.

1) Having the birth at home with a midwife
I was introduced to this idea after reading a phenomenal book by John Robbins, Reclaiming Our Health (I highly recommend this book, it’ll blow you away). Since then, I saw The Business of Being Born (also available through Netflix) and my resolve intensified greatly to give birth at home (or in the very least by using a birth center).


2) Insurance doesn’t cover maternity
WTF? This is something I didn’t know until recently. The good news is that having a home birth is supposed to be less expensive than a hospital.

3) Circumcision
Last year I saw a Penn & Teller: Bullshit show (it aired on Showtime, but I watched it online. It appears to have been taken down though). Their premiere episode, Circumcision, was a fascinating, yet comical at times, investigation into the controversial medical procedure that gets people asking, “to snip or not to snip?” It might not be so crazy to say “no” to this procedure anymore. Thus, the days of a boy feeling weird in the locker room are probably not going to be much of an issue in the future, if people continue to elect not to have the procedure done to their sons.

4) To Vaccinate or Not To Vaccinate
I saw an episode of Larry King Live with Jennifer McCarthy and she talked about her concern over the fact that in the recent years we’ve added so many new vaccinations and the speed to which we schedule them could be extremely harmful, with the possibility of being linked to autism.

5) Homeschooling – A Smart Microtrend
Homeschooling has become a microtrend in itself (just like veganism). It’s exciting to see this option gaining popularity with people taking their children’s education into their own hands to make it the best possible. In a time when… 1) more people are working from home, 2) amazing technology like the Internet makes this easy to do, and 3) families are growing tired of our shitty educational system…this is no longer a “fringe” lifestyle.

In fact, I was amazed a few months back, while teaching a Raw food class, when the topic came up and I had a handful of Scottsdale moms (all very normal, well-to-do ladies) who homeschool their kids – and they didn’t even know each other! I say “Scottsdale Moms” and describe them as such, because there was a time when homeschooling was associated with either bible-thumpers or granola-backpacking-barefoot-tree-huggers. On the contrary, these women, and their families, are far from that.

As far as our teaching skills…well, my man is wicked smart with an MBA from Wharton (he’s brilliant), a mind like a steel-trap (he remembers everything he reads and hears), and he has the patience of a monk (he’s going to be such a good dad). Me? Well, I’m college educated myself (University of Michigan), I’m resourceful and well-versed in many subjects, I’m super fun, I have the time to dedicate, and I can make a mean-green-smoothie! We feel like we’ll do a world of good for our kids if we homeschool.

6) Breastfeeding – I know I’ll do it…but for how long?
It’s my understanding that some women in the United States do this for the first 6-12 months typically. Yet, in other parts of the world, they breastfeed for at least a few years.
Check out this NEW study suggesting that breastfeeding is associated with increased intelligence!

7) The Diet!
Of course, my children will be living a High-Raw-All-Vegan lifestyle. The concern can be with letting other people babysit (family, friends). I’ve experienced, first hand, people making food for me, and thinking it follows along with my lifestyle, only to find out there was an ingredient included which wasn’t vegan. Oops.

I will end with one of my favorite quotes because, although some of the practices mentioned in this post can seem foreign to many, I can’t help but think that they feel very natural to me. I love what Gandhi said, Be the change you wish to see in the world.