Move over Old School and Wedding Crashers! I just saw what might be the funniest movie ever. I laughed so hard, I almost peed my pants! In fact, I had to force myself to curb my laughing so that I didn’t miss the next funny line. Are you ready for the name of the movie yet? It’s Death at a Funeral. If it’s playing near you and laughing is one of your favorite things to do, then go see this movie straight away! With studies showing that laughter is the truly the best medicine, go get your dose.

On a Raw note, when I go to the movies, the choices for snacks are slim to none. Well, none actually (there’s nothing slim about it!) So, my favorite snack for the movies is a big fresh organic smoothie. Sometimes it’s green and sometimes it’s all fruit. I’m a big advocate of using glass over plastic, so I take a purse and put my glass mason jar filled smoothie right in (we ladies are lucky to carry purses). Ssshhhh…don’t tell the movie police on me. Truthfully, if the movie houses actually offered healthy snacks, I wouldn’t have to bring my own. 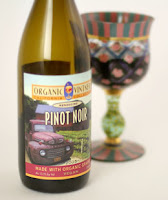