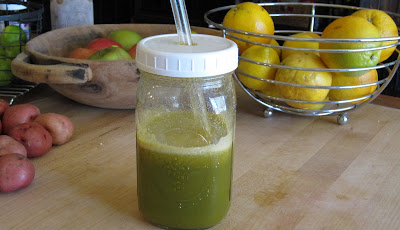 All organic (except the coconut milk, but it’s non-gmo). :)

1 cup raspberries, 1 sliced banana, 1/4 cup coconut milk (not raw)
I started the day with this awesome recipe before heading to the farmers’ market for my weekly CSA of locally grown, organic produce. Yum Yum!!! I’m so proud to support our local farmer. It means the world to me.
1 tablespoon sprouted dehydrated sunflower seeds
These have lots of vitamin E in them… vitamin E is revered as the birth/fertility vitamin.
2 cups dehydrated, seasoned Kale Crispies
I love snacking on these. My mom and I had some in the car, thankfully, while we were running lots of errands this morning. We started at the farmers’ market at 7am. Then, we went to Whole Foods to do some shopping damage for foods we couldn’t find at the farmers’ market, and then we went to Sunflower Market because I refuse to pay $3 each for organic avocado at Whole Foods Market, I refuse to buy apples from across the world in New Zealand when there should be perfectly yummy apples from CA or WA (but Whole Foods doesn’t seem to carry hardly any of these and the very few ones they had were mushy feeling), and the final reason for Sunflower Market was that the coconut milk and coconut milk yogurt I like are much cheaper there! Unfortunately, Sunflower Market didn’t have good avocados so we hit up Trader Joe’s on the way home and found a bag of them there. So, as you can see, we were hitting a few different places and had to snack on something so we didn’t pass out from starvation! ;) Kale Crispies to the rescue!!!
1 quart Cucumber Carrot Vega EFA Green Juice
This was a delightfully refreshing juice made from 2 cucumbers, 4-5 carrots, 1/3 bunch of celery, 6 leaves dandelion, 1 tablespoon Vega EFA oil. I used my Breville to make this lickity-split.
2 Brazil Nuts
20 cherries
Dark Green Pretty Good Smoothie
I’m calling it this because it was pretty good – LOL. The recipe made about 5 cups. I drank 3 cups and gave the other two to my mommy. :) She really liked it. I used my mom’s BlendTec to make it (1 cup water, 1 head Romaine, 1 granny smith apple (cored), 1 lime (peeled), 10 strawberries, 2 large leaves kale)
Quinoa Protein Vegetable Mix (part Raw, part cooked vegan)
I made a big batch of plain red quinoa last night. Today and tomorrow, I’ll use it in a couple of different recipes. As you know, I’m upping my protein and fat a little to help prep my body for getting pregnant and having my next embryo transfer (hopefully later this month!) The recipe isn’t yet finalized. When I have it done, I’ll post it.

And… for dessert???? Drumroll!!!! I’m making my husband’s favorite… Rudolph Cherry Cobbler from my Holiday book and ebook.

Here is a quick video showing you how I grow my sprouts at home. I LOVE GROWING THESE NUTRITIOUS LITTLE CUTIES!!! I’ve written about it in a previous blog post here.

The link to the water filter I use is here.
I usually buy my sprout seeds here but there are many great sources on the web. Enjoy!

As most of you know, I usually follow a diet and lifestyle that is HRAV (high raw, all vegan) and always as organic as possible. The rest of the time, I go all raw. But… there are times, like now (traveling in NY), that I’m loving up both the Raw and the Cooked Vegan. I’m a foodie at heart. And, in NY, I’m surrounded by tons of vegan restaurants (some which offer Raw options) as well as a handful of Raw restaurants, and I can’t help but joyfully indulge. I’m like a kid in a candy store out here. I want to try everything! But, even though I’m eating a fair share of cooked organic vegan food, I’m drinking lots of fresh green juice to keep my cells happy and dancing. Again, easy to do in NY because so many places offer it. (Oh, and we’re taking digestive enzymes to help our digestion).

So, without further ado…. here are some details about our foodie adventures.
Our hotel is one block away from a place called Blossom. I’ve briefly written about it before here, and I need to write about it more. It’s organic vegan cuisine with a few raw options on the menu. The raw options are indeed very good, and the cooked vegan food is awesome as well. The staff is amazing and super cool. And… the green juice is mega delish (I’m in love with Field of Greens juice and have it almost daily). Needless to say, we’ve been spending a lot of time at Blossom.

Tuesday afternoon we went to the east village because later in the evening we were going to meet Gena (my new great friend) for dinner at Caravan of Dreams. We arrived in the area quite early so that we could walk around and check out Liquiteria (a super popular, wicked cool juice bar) and some other places. Liquiteria is hands-down awesome. They had a huge refrigerator full of organic Norwalk pressed juices – can you say HEAVEN? (And, they’re less expensive than One Lucky Duck’s pressed “to-go” juices.) I immediately bought one and chugged it down. Aahhh! Yum.
Then, we started walking down the street toward a neat farmers’ market, when I noticed a place called Stogo (pronounced stoe-go). I was instantly drawn to it because it said Gourmet Organic Vegan ice cream. Even though we were scheduled to have dinner about an hour and half later… I couldn’t resist. There’s this part of me that gets so excited seeing a business that is both organic and vegan, and frankly, I want to give them my business. I want to support them. “OK, twist my arm” (my husband says – haha) “let’s have vegan ice cream before dinner.” So, we did. It was phenomenal.

I admit though, that by the time we met Gena for dinner, I was stuffed (and I had only eaten a small ice cream – what the heck?). But, being the foodie that I am… I made room in my tummy for more great food at Caravan of Dreams. This place is fantastic. The inside is cozy, warm, and dim. They have plenty of raw options on the menu as well as tons of cooked vegan. It’s mostly organic as well. I decided to have two soups for dinner. One raw. One miso. The miso was very good. It was a big bowl packed full of veggies and miso broth. The raw soup was fabulous… oh my goodness gracious… the raw soup was fresh, clean, and so good. I would get it again and again and again if I lived here. I also ordered a crazy swamp-like kombucha drink that I actually was just not hard core enough to finish. I gave it to my husband. It was…. pretty ick. I mean, doesn’t it look swam-like in that glass? The ingredients were: fresh raw organic kombucha, aloe, spirulina, fresh green juice.

After dinner, Gena and I ordered some yummy tea. It was called “The Good For Everything Tea” made of ginger, cayenne pepper, lemon, and goji berries(?). 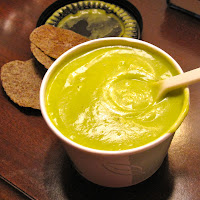 I knew that I had to have more of the raw soup though, so before leaving I ordered a bowl to go and ate it in the hotel room later that night. The ingredients: avocado, young thai coconut, and sea salt. That’s it. It’s fab! (Those are little flax crackers they gave to eat along with the soup. Not as crazy about those.)
Wednesday:
Because of all of the food we ate Tuesday, we decided to fast a bit for the first part of the day while we visited the Museum of Natural History. Then, after the museum, we went and ate dinner at Blossom (again). After being on our feet all day at the museum, we didn’t want to venture far (and hello, we were starving!) so we stayed close to home and went for a great dinner and green juice at Blossom.
Thursday:
We went back to the east village for the afternoon. We found a very cool place called Cosmic Cantina. They’re open until 5am (my kind of place) and they serve all organic, all veg burritos, salads, and fresh citrus juices. Sweet! We stopped in and split a macro burrito which had a homemade whole wheat tortilla, brown rice, broccoli, tamari, and adzuki beans. It was quite good. Very clean tasting. If we get another chance, I’d like to drop by and try something else of theirs… maybe at 3am. 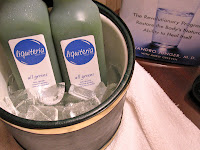 After that, I was craving my green juice. Since we were in Liquiteria proximity, we made a mad dash for them. I chugged down an awesome alkalizing green juice and bought two more for the hotel room later. That’s a picture of it in an ice bucket, staying chilled. It’s soooo good.

My husband has been looking forward to the release of the new movie “Moon” and it happens to be currently showing in both NY and LA. Score! We’re in NY! So, we went and saw Moon. It was weird and very good. A groovy story. After the movie, we tried another restaurant that I had on my list, Angelica Kitchen. We had sandwiches, miso soup, and kuchika tea. The tea hit the spot. It’s been raining pretty much non stop since we arrived in NY and the tea was nice, soothing, and warm.
We have many other places that we want to try… stay tuned for more raw and vegan foodie adventures in New York.

It’s time for a recipe! YAY! Here is a delicious, sassy, and unique recipe that is creamy and nutritious (ginger and hemp seeds rock!). This recipe is featured in my latest book, Kristen Suzanne’s Ultimate Raw Vegan Chocolate Recipes. And, the lovely Ingrid (of Raw Epicurean) also featured this on her blog with a picture.

By Kristen Suzanne of KristensRaw.com

Ginger is a rich source of powerful antioxidants, which have anti-inflammatory properties, and there is evidence that ginger’s antioxidants might help fight/inhibit the growth of certain types of cancers. Not only that, studies show ginger can also help boost the immune system.

Hemp is commonly referred to as a “superfood” because of its amazing nutritional value. Its amino acid profile dominates with the 8 essential amino acids (10 if you’re elderly or a baby), making it a vegetarian source of “complete” protein! And, it’s loaded with essential fatty acids in an ideal ratio of omega 3s to omega 6s. Go hemp!

Blend all of the ingredients until smooth and creamy. Exotic Chocolate Milk will stay fresh when stored in an airtight container for up to five days.

* Available at most Middle Eastern Markets, online, and at some Whole Foods Markets.

Sunday, we celebrate the holiday with family. Here is our 100% Raw vegan food intake plan:

This week I’ll be blogging about the latest hair care products I’m using (that I L-O-V-E!) as well as details about freezing Raw food.

Congratulations Vicki’s Vegan Vice!!! You win!!! Your name was chosen as the winner of my 9th Awesome Giveaway. Your prize is a 16oz bottle of Vitamineral Green – YAY!!!!!! Simply email me the address you want your prize sent to.

Here is what Vicki’s Vegan Vice had to say when asked, “Who do you think is the most impressive person alive today AND why?“

The most impressive person alive today is Barack Obama. He has overcome seemingly insurmountable hurdles while inspiring the world to change.

My next Awesome Giveaway is in April (unless I do another one sooner!!!), so check back for details!