I’ve been dabbling in yoga over the past year.

I love it though.

The times I don’t get to practice are because life gets in the way, which isn’t a good excuse, except for me –> I like to practice my yoga in a class instead of alone at home. And getting to a class can be difficult sometimes. (Though I’m open to trying yoga at home in the future so I can take my mat on the road with me when we travel.)

As of a couple of months ago, I consider myself still a bit of a newbie at yoga, but since I knew most of the moves, I decided to try adding heated yoga into my practice. I went to Village Health Club and Spa, where we belong (and LOVE), and had my first heated class a few months ago. They have the best classes and teachers for all their other classes so I felt confident trying my hand at a heated yoga class in spite of feeling intimidated by the class.

END_OF_DOCUMENT_TOKEN_TO_BE_REPLACED

Thank goodness Dave Asprey finally has a great cookbook coming out because I need some inspiration in the kitchen. 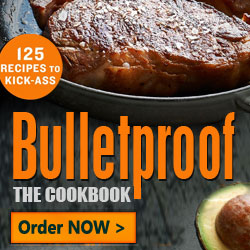 As I type this, I’m eating a non-bulletproof rice cracker dipped in dark chocolate with cream cheese, pecan butter, and spicy raw honey dripping from it (and my chin – ouch, did I mention spicy?).

It was one of those weeks. No mood and no inspiration. I need some help and I’m looking forward to Bulletproof: The Cookbook to fill my mind (and body) with delicious healthy recipes that will make me bulletproof through the holidays (and all year long).

END_OF_DOCUMENT_TOKEN_TO_BE_REPLACED

Let’s dive in and start with the food. Duh.

END_OF_DOCUMENT_TOKEN_TO_BE_REPLACED

I’ve mentioned a few times that I recently took a 6-month course at a local cooking school to increase my skills in the kitchen. When I went from vegan to omni, I was feeling out of sorts in the kitchen. I ruined too many grass-fed steaks and wild-caught fish.

So, I talked mom into taking this course at Classic Cooking Academy.

It was amazing, fun, and worth every penny especially since I learned to shuck oysters! I don’t know about you, but watching that on YouTube is not as good as practicing in a class with a professional to guide you.

END_OF_DOCUMENT_TOKEN_TO_BE_REPLACED

Juicers are not a new topic on this blog. I’ve been using them and writing about them for years. There was a time I loved my twin gear Green Star back in the day when I was a newbie to raw food. Then, I moved to a cute n fast Breville because motherhood was taking most of my time (actually I’ve owned a couple of Breville juicers). I also fell for the Hurom single auger juicer in an attempt to up my quality of juice while keeping it easier than the Green Star. Finally, I topped out at the all time ultimate Norwalk Juicer thinking that it would save me money in the long long long long run, give me a superior juice never to be more superior, and offer me the option to juice big batches that can be stored for a few days so I wasn’t juicing every day. I wrote about these juicers, and I imagine when this post is done that the bottom “similar posts” links will feature them.

END_OF_DOCUMENT_TOKEN_TO_BE_REPLACED

You all know how much I love homemade bone broth because bone broth is crazy yum, bone broth is magically healing, and bone broth (i.e., stock) takes every recipe it’s used in to restaurant-delicious levels, or as my husband likes to say, “It’s chef-y.”

The awesome thing is that making bone broth is so easy it’s practically a joke. When I first ventured into omnivore territory after being a vegan for almost a decade, I started with enjoying pasture-raised eggs in my diet. Shortly after, I was drawn to move into other areas, and bone broth was calling my name. I never would’ve guessed that in a million years, but it did. I followed my intuition, smart woman that I am, and it’s been a fun and delicious journey ever since. I feel like a witch with a cauldron when I make it. In fact, I need a witch’s hat on when I make it. My daughter would love that. Note to self: buy witch’s hat.